Walter brings you voices and commentary from on the ground in Israel.

Walter Bingham is a veteran Journalist and Broadcaster. He holds a BA in Politics and Philosophy and a Post Graduate degree in Political Philosophy. Before making Aliyah in 2004, Walter had a long career in radio broadcasting in the UK. Walter lives an exciting life, and has entered his 98th year. He officially holds the Guinness world record, as being the oldest talk-show host AND the oldest journalist in the world. Walter had his own show on the radio in the UK and has also acted in films including several Harry Potter movies. In Israel he also presents ‘Walter’s World’ on Arutz Sheva which is additionally heard on J-Air radio 87.8 FM in Australia. However, you can join Walter here on Israel News Talk Radio for his show ‘The Walter Bingham File’ every Tuesday at 4 pm Israel time, 2pm UK time, 9am Eastern (U.S.) time, and 1am in Melbourne.

How: The International community and their leaders condemned Israel’s democratically elected government before it had even been established. The lawlessness: In the US where the so-called liberal left is allowing the radicals to determine policy …Keep Reading!

Hear: Walter’s report and interview to show that there is no necessity for a diploma in history, to know, that despite their protestations, anti-Semitism is engrained in the nature and lifestyle of Poles, as reflected …Keep Reading!

Although: I generally don’t claim to educate, but inform and entertain, today I believe that you will be able to learn something about our country, that you may not have known in such detail. Should …Keep Reading! 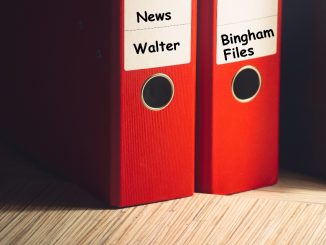 Now: That we have finally achieved our goal to be able to form a real right-wing government, the party and faction leaders behave like naughty children in a kindergarten who stamp their feet and fight …Keep Reading!

Only: The Immediate death penalty for terrorist murder and the punishment of the perpetrators immediate family who brought him or her up, will help to deter continued terror. Walter: explains the decline of western values …Keep Reading!

Lone Wolf: Terrorists have claimed another three lives this week. For terrorist murder the death penalty is appropriate. It also saves prison costs. Our Politicians: Have still not learned. Infighting and insistence on major portfolios …Keep Reading!

Finally: We shall have a stable government for the next four years. Netanyahu needs a firm hand to stop the parties’ infighting for advantages. Now the country must come first. The: US elections were even …Keep Reading!

Israel: Finally voted for change and a government that has the mandate of the people to instate a right-wing policy, that will bring the country back to Zionism and a Jewish State. While: The government …Keep Reading!

The: Fake claim that the Lebanon Border agreement is a win for Israel. We handed over a part of our territorial waters, which is no different from surrendering land. Lapid has no mandate. Hezbollah won. …Keep Reading!

Hear: About my shock when I read the treacherous words of the caretaker Prime Minister Yair Lapid, how he panicked to get votes, and how he grovelled to the Arabs to get theirs. And how …Keep Reading!